Background: Recurrent idiopathic epistaxis is a common paediatric condition associated with anxiety in children and their parents. We retrospectively studied the safety and efficacy of silver nitrate cauterisation in children.

Materials and Methods: A retrospective cohort study of 70 children was performed as a part of departmental Audit for the year 2018- 2019.

Results: The average age was 10.51 [SD = 2.42], after a single session of nasal cauterisation 78.57 % cases reported no further nosebleeds. Stinging and discomfort was reported by 70% of patients.

Conclusions: Outpatient silver-nitrate cautery under topical anesthesia is a safe and effective method associated with mild stinging and discomfort.

Nose bleeds are one of the most common emergencies encountered by ENT surgeons. It has a bimodal age distribution, with peaks at extremes of age.1 Recurrent idiopathic epistaxis is a condition seen in childhood characterised by repeated episodes of self limiting nosebleeds. In most cases no cause is identified, though repeated digital trauma in the form of nose picking is the most likely cause.

Majority of epistaxis cases arise from the anterior nasal septum; with the bleeding arising from Kiesselbach's plexus.2, 3 Such anterior bleeding arises from dual blood supply from the internal and external carotid arterial systems. The anterior and posterior ethmoidal arteries arising from the internal carotid artery; whilst, the sphenopalatine, superior labial, and greater palatine arteries arise from the branches of the external carotid artery.4 If the conservative management to control recurrent bleeding fails with prior discussion of treatment options with the guardians of the child then direct vaso occlusive therapy to the area is warranted. Such site of bleeding is usually located within the little’s area where prominent vessels are seen on anterior septum.

We performed a retrospective review of children who underwent silver nitrate cauterisation with the primary outcome of efficacy in control of nosebleeds and the analysis of complications.

A retrospective cohort study of 70 children was performed as a part of departmental Audit for the year 2018- 2019 at a municipal general hospital in central suburban Mumbai, India. All paediatric patients who underwent Silver nitrate cauterisation under topical anaesthesia for Recurrent Idiopathic Epistaxis during the study period were included in the study. Those who underwent endoscopic diathermy or surgical management of nosebleeds were excluded. The audit consisted of retrospective review of case records and was approved by the institutional review board. Appropriate statistical analysis was performed using Graph Pad Prism software.

In the outpatient setting after performing a coagulation screening and ruling out JNA in teenage males, under headlight and using thudicum’s speculum cotton pledgets soaked in 4% Lignocaine and Xylometazoline were applied to the affected nostril with tilley’s forceps and kept for 10 minutes to achieve topical anaesthesia. The cauterization is performed only to one nostril at a time to avoid septal perforation after identification of bleeding point or prominent vessel. 50% silver nitrate was applied in a circumferential pattern around the site of bleeding before applying to the bleeding site itself, with minimal cotton wool on a Jobson’s Horne probe. The procedure is performed till mucosa turns white; as any brisk bleeding will wash silver nitrate away before cauterization; hence relative hemostasis with pinching the nose is needed for successful haemostasis.(Figure 1) Care is taken to avoid contact of caustic material to nostrils and skin to avoid staining. Antibiotic and steroid cream was applied post cauterisation for a fortnight to avoid scabbing and crusting. The patients were followed up after 6 weeks to assess the success of the procedure.

The demographic details of our study are tabulated as below. (Table 1)

The primary outcome of efficacy in control of nosebleeds was measured by the number of attempts needed to achieve a 6 weeks nosebleed free period. The distribution of patients who achieved this with a single cauterisation against those needing repeat procedures has been depicted in the following figure.(Figure 2) 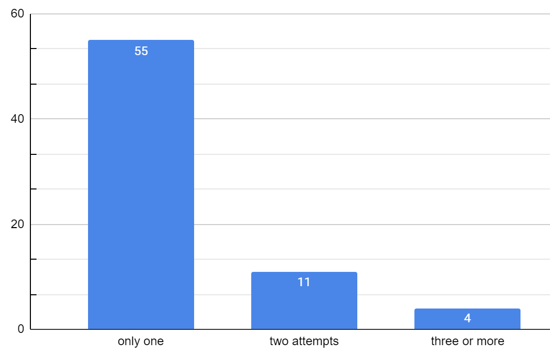 The most common complaint was post procedure stinging and discomfort. The severity was recorded using the Wong–Baker Faces Pain Rating Scale which is a cross culturally adapted pain recording scale for children. The responses of the same are shown in the following figure. (Figure 3) The difference in the low pain and discomfort score (score 0-2) as compared with higher score of 4 or above was statistically significant with (p=0.0001) with t test. 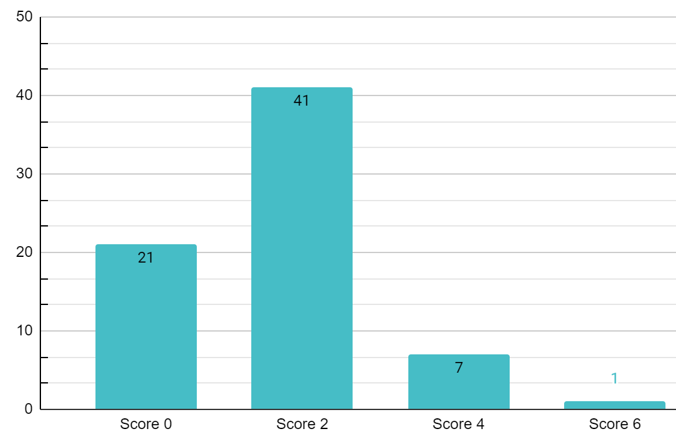 Apart from this 4 patients developed eschar and crusting, 1 patient developed staining of nasal sill, we recorded no cases of septal perforation or synechiae during our follow up period.

Nosebleeds are a very common presenting complaint seen by otolaryngologists and often present in emergency settings. The management of epistaxis in children is challenging and requires a systematic approach. The recurrent idiopathic epistaxis leads to high levels of stress and anxiety in children and their parents. The site of bleeding is usually anterior septum in the paediatric age group, whereas posterior nasal bleeding is a problem of advanced age.

In most patients nosebleed is self limiting and usually settles with simple measures such as pinching the nose. However when it becomes recurrent a referral to ENT is usually done. Careful history with review of constitutional symptoms is needed to identify any systemic cause of nosebleeds, clinical examination with nasal speculum and adequate illumination in children usually reveals the site of bleeding on anterior septum. Care should be taken in teenage males to rule out Juvenile Nasopharyngeal Angiofibroma (JNA).

In children with continued epistaxis where a prominent vessel or site of bleeding identified, nasal cautery is warranted. It should be taken into notice that nasal cautery is possible only when the site of bleeding is visible. Within the aqueous solution of Silver Nitrate (AgNO3), the silver ion (Ag(I)) is reduced to neutral silver metal (Ag(O)) which leads to precipitation with the formation of free radicals. This chemical reaction results in oxidation of organic tissue. 5 This oxidation results in chemical cauterisation thus achieving haemostasis. According to Murthy et al (1999) chemical cauterisation leads to the destruction of blood vessels by scarring and sclerosis of these vessels.6

As the main risk of this procedure is septal perforation which has significant morbidity and impact on quality of life, it is highly recommended to avoid bilateral cautery on opposing sides.7 Our institutional practice is to cauterise only one nostril at a time and avoid blind cauterization for reducing the risk of septal perforation.

Shargorodsky et al. has shown that single application of silver nitrate cautery had a 79% success rate.8 Our study mirrors these findings with 78.57% cases reported no further nosebleeds after a single session of cauterisation. Only 0.06% cases required three or more sessions thus showing the effectiveness of silver nitrate nasal cautery.

Silver nitrate cautery, in our study has been shown to be a painful procedure with stinging and discomfort reported by upto 70% of patients. This has also been reported by McGarry (2006).9 However it should be noted that of the children who reported pain or discomfort, 58.57 % scored it as mild and only 11.43% reported moderate pain scores using the Wong–Baker Faces Pain Rating Scale.

It was noticed in our study that there were no serious adverse effects associated with this procedure. Thus, outpatient silver-nitrate cautery under vision to stop nosebleeds can safely be performed under topical anesthesia. It is a safe and effective method however patients can suffer from mild stinging and discomfort which needs to be discussed prior to the procedure to allay anxiety.

All contributing authors declare no conflicts of interest.

© This is an open access article distributed under the terms of the Creative Commons Attribution License - Attribution 4.0 International (CC BY 4.0). which permits unrestricted use, distribution, and reproduction in any medium, provided the original author and source are credited.