Active squamosal chronic otitis media is a challenging disease for both patients and doctors. Traditionally performing bilateral mastoidectomy has been feared with a dreadful complication like bilateral sensorineural hearing loss, facial palsy, cerebrospinal fluid leak or retrograde thrombophlebitis and thus was reserved for patients who were chronic ill with bilateral active squamosal disease and couldn’t wait for two staged procedure, or those who want to avoid the hassle of two admissions and operations and those who couldn’t afford two surgeries. In our patient, with single stage bilateral surgery there was no complication and the patient recovered completely. So, we suggest that bilateral mastoidectomies can be performed in squamosal chronic otitis media if needed.

Mastoidectomy is the surgical procedure done for access, exposure, and exenteration of all the mastoid air cells in patients with disease in temporal bone or as an access to the middle or inner ear.1

There is risk of various complications associated with mastoidectomy. Previous studies have shown that performing a tympanoplasty with or without mastoidectomy carries a risk of 0.8-4.5% of postoperative sensorineural hearing loss of at least 10db.2, 3, 4 There is also a risk of 0.4-4% injury to facial nerve while performing mastoidectomy.5 The risk of hearing loss and facial nerve injury due to surgery, should be weighed against the natural progression of the disease which may lead to extratemporal or intratemporal complications.

The procedure of performing bilateral mastoidectomy is reserved for patients who are chronic ill and have bilateral active squamosal disease and can’t undergo two staged procedures, or those who want to avoid the morbidity of two operations or and those who can’t afford two surgeries.

We share our experience of performing bilateral mastoidectomy and the challenges faced by the operating surgeon.

A 17-year-old boy presented to our out-patient department with a childhood history of bilateral ear discharge, which was mucopurulent in nature, yellow in colour, scanty in amount, foul smelling and on and off associated with blood. Patient also had loss of hearing in both ear for 1 year and couldn’t listen even to loud sounds. There was no associated pain in the ear or headache. Patient had developed vertigo which was associated with vomiting for 10 days.

A thorough general and local physical examination was done. Patient was conscious and oriented but repeatedly complained of rotatory sensation and nausea. On local examination there was large central perforation with mucopurulent discharge present in the right ear while there was a single polyp seen in the external auditory canal with discharge in the left ear. Polyp seemed to arise from the middle ear on probing. Fistula test was negative on both the sides, but head shake test revealed spontaneous nystagmus with fast component towards the right side. There was no neck rigidity, Kernig’s sign and Brudzinski sign both were negative.

Bilateral canal wall down mastoidectomy, in same sitting, was planned. Operation was performed under general anaesthesia and right side was operated first as the disease was more extensive this side. There was extensive cholesteatoma with debris present on both sides with matrix present [Figure 3] overlying the critical structures and causing erosion of bilateral lateral canal [Figure 4], sigmoid plate on the right side and facial canal on the left side. Temporalis fascia was used on the right side to cover lateral canal dehiscence, but on the left side periosteum was used as the defect was large. Some granulation tissue was also encountered on left side which lead to unwanted bleeding, but careful dissection was done and all the disease was removed. Postoperatively there was no facial palsy and patient with bilateral mastoid dressing was able to follow command [Figure 5]. The patient had spontaneous nystagmus, grade I on right gaze, which reduced after 2 days of medication and disappeared after 5 days. 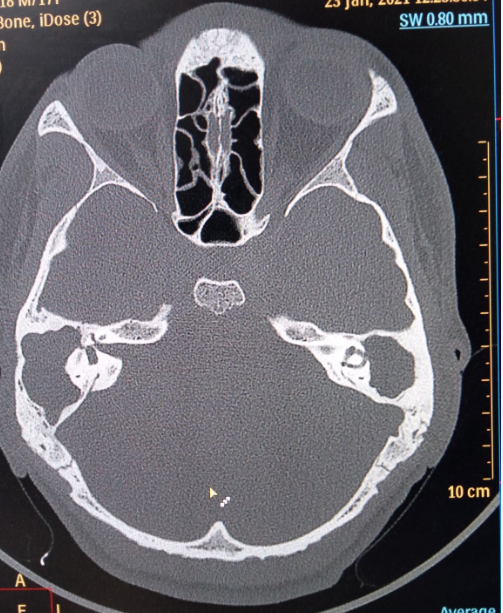 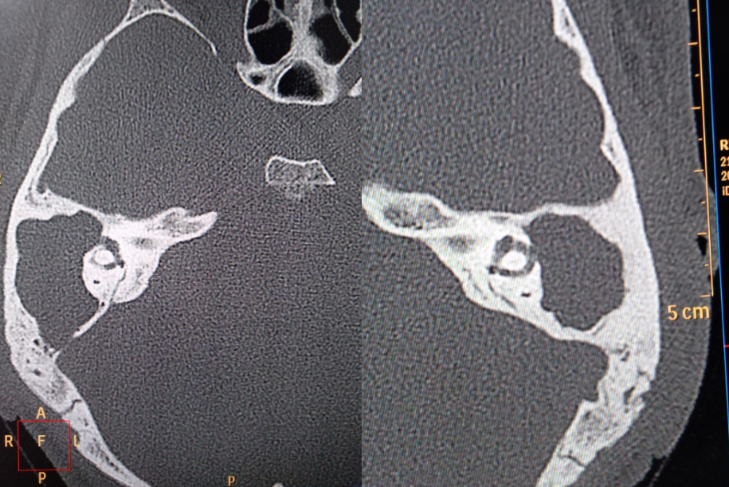 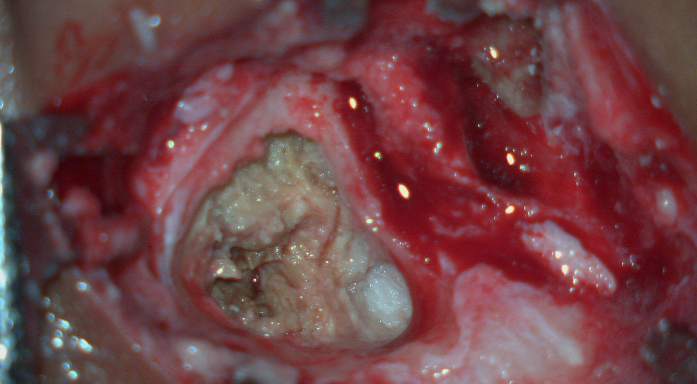 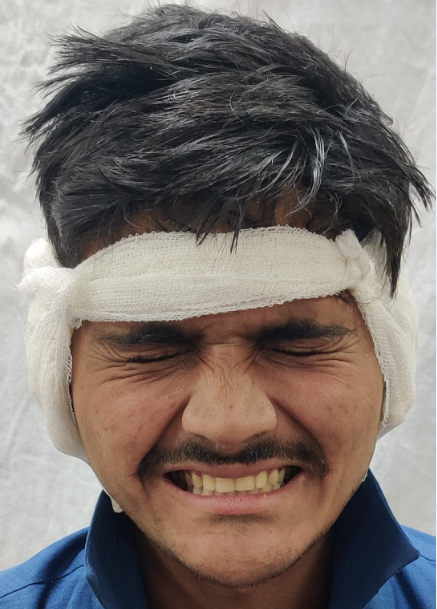 Active squamosal chronic otitis media is a clinical challenge for doctors and providing a safe, dry and hearing hear is a daunting task. Mastoid exploration carries a known risk of complication like sensorineural hearing loss, facial nerve palsy and cerebrospinal fluid otorrhea and performing simultaneous bilateral mastoidectomies just amplifies this risk. In experienced hands however, these risks can be very minimal and the need for two operations and morbidity as well as the cost of surgery can be significantly reduced.

Usually, the time duration between two procedures is 3 months and only few cases of simultaneous bilateral surgery have been reported in literature till date.6

In our case patient’s parents wanted to get both ears operated simultaneously to reduce the cost of second operation in terms of re-admission and medication.

The key point to remember in simultaneous bilateral mastoidectomy is, if the first ear has extensive disease, which is difficult to remove completely, without risk of injury to inner ear then, the surgeon must decide if the second ear’s situation merits operation as an only-hearing ear. It is advantageous to operate ear with extensive disease first, as surgeon is fresh, relaxed and may maintain the focus to deal with any untoward sequelae.

One more advantage of simultaneous bilateral mastoidectomy, which author felt is that, the surgeon is already prepared for any anatomic variations on the second side, because of similar anatomy on both the sides.

Merits and demerits of a single staged procedure should be explained to the patient, preoperatively.

The simultaneous bilateral mastoidectomy procedure was justified in our case of bilateral active squamosal chronic otitis media with bilateral lateral canal fistula with profound hearing loss, because if the surgery was performed in two stages, the disease would have progressed and the patient would have developed any extratemporal or intracranial complications.

Though performing bilateral mastoidectomy is taxing for the surgeon both mentally and physically because of the longer duration of the surgery, it ultimately saves patients time, money and reduces suffering.

All contributing authors declare no conflicts of interest.

© This is an open access article distributed under the terms of the Creative Commons Attribution License - Attribution 4.0 International (CC BY 4.0). which permits unrestricted use, distribution, and reproduction in any medium, provided the original author and source are credited.