Kr Gupta and Gupta: The study of cases of hoarseness of voice of north India region

In Medical Science, Hoarseness is the term used to describe a change in normal quality of voice of a patient which is rough or harsh, lower in pitch and more or less discordant (1). Depends on duration of illness, hoarseness can be divided into acute or chronic condition. The acute onset is more common and mainly caused by inflammation (acute laryngitis) chronic sinusitis acid reflux disease, excessive alcohol use, smoking and over use or misuse of voice whereas other cause may be, laryngeal trauma or thyroid surgery and systemic disease (4). The aim of our study is to analyse clinical profile, assess different etiological factors and to find out common precipitating factors leading to hoarseness of voice.

Many predisposing factors were noted like tobacco chewing, smoking, alcohol drinking. Tobacco chewing (38.33%), smoking (33.99%) and alcohol consumption (15.81%) were most common predisposing factors in descending order. Functional disorder was reported in (5.13%) cases and vocal abuse in 2.37% cases. In present study most of the patients were referred for speech therapy and psychotherapy along with vocal conservation and maintenance of vocal hygiene.

In Medical Science, Hoarseness is the term used to describe a change in normal quality of voice of a patient which is rough or harsh, lower in pitch and more or less discordant.1 Hoarseness of voice is one of common symptom in otolaryngological practice and is invariably the earlier manifestation of laryngeal involvement directly or indirectly by disease.

Jackson and Jackson (1930) observed that hoarseness is the most important symptom of laryngeal disease and it will not manifest when the cords and the motor mechanism are entirely free from disease.2 However, he re-emphasized that hoarseness is not a disease in itself, but rather a symptom of disease or disturbance in the larynx or along the course of the laryngeal motor nerve. It is often the first and only signal of serious local or systemic disease (Von Leden, 1958).3

Depends on duration of illness, hoarseness can be divided into acute or chronic condition. The acute onset is more common and mainly caused by inflammation (acute laryngitis) chronic sinusitis acid reflux disease, excessive alcohol use, smoking and over use or misuse of voice whereas other cause may be, laryngeal trauma or thyroid surgery and systemic disease.4

Hoarseness of voice should be diagnosed in a patient with altered voice quality and pitch and prompt evaluation is needed to detect specific etiological factor and its pathology. The disease ranges from benign to the most malignant manifestation7 and therefore a various parameter was considered under present study. The aim of our study is to analyse clinical profile, assess different etiological factors and to find out common precipitating factors leading to hoarseness of voice.

The retrospective study was carried out at Department of ENT, Government Medical College & Super facility Hospital and data were collected from June 2017 to May 2019 of a period of two years durations. The proforma and master chart were designed based on objective of the study. As per proforma, detailed history of disease, examinations methods and finding, clinical features and differential diagnoses were recorded from medical record section of the college, OPD centre of hospital and pathological reports and imaging reports were collected from pathology and radiology department of the institution for complete study.

Distribution of profession in hoarseness of voice patients

A total of 34500 patients visited OPD of Otolaryngology department from June 2017 to May2019. Out of these,253 cases presented with complaint of change in voice (Hoarseness). The incidence of hoarseness among total OPD patient was 0.73%.

In different clinical conditions, hoarseness of voice was reported. Acute and chronic laryngitis were reported in 35.57% and 26.87% cases respectively. Malignancy was reported in 10.27% cases, vocal cord palsy in 22.22% cases, Vocal cord nodule in 9.09% cases and vocal cord polyp in 4.74% cases. 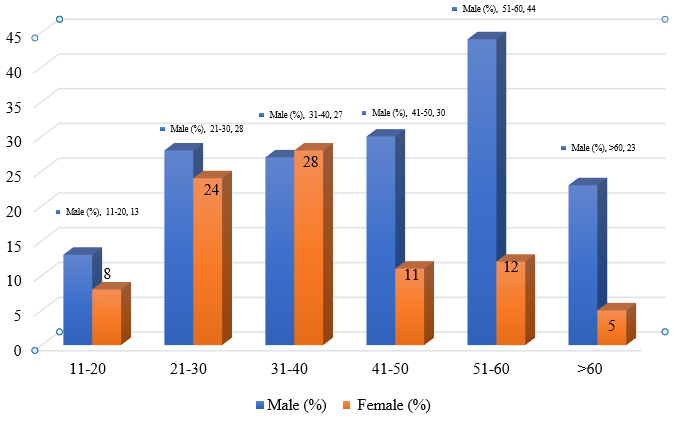 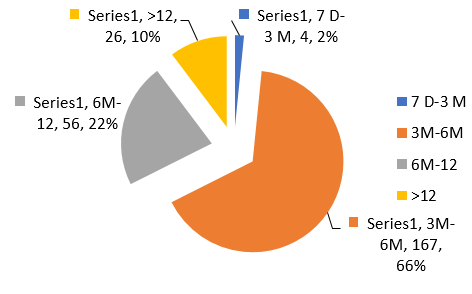 In our study Male: Female Radio of 1.87:1 with male predominance was observed. Our finding is exactly in confirmation with that of others studies which were done in India and it also showed male predominance.

Herrington-Hall et al (1988) stated that taking age group as variable, it is clear that laryngeal pathologies occur most frequently in the older age group because infectious condition like acute and chronic laryngitis, carcinoma and vocal fold paralysis being the most commonly found causes of vocal dysfunction in the elderly.7 Females presented with laryngeal pathologies at a slightly younger age. In our study in 31.81% female cases, hoarseness of voice was reported in 31-40 years age group and in 26.66% male cases, hoarseness was reported in 51–60-year age group

Duration of hoarseness ranged from 7 days to more than 12 months were taken under our study and in maximum patients, manifestation of a hoarseness of voice was reported in 6 months -12 months duration.

Fritzell (1996) and Titze et al (1997) reported that professionals with the highest risk of having voice problems are singers, teachers, lawyers, salespersons, and health professionals. An important point is that a professional voice user will seek medical help only if he or she is aware of its importance among other things. 8 Smith et al. (1997) concluded that teaching was a high-risk occupation for voice disorders with the possibility of significant work-related consequences Clark A Rosen (2000) proposed classification and nomenclature, and divided voice disorder into four major categories.9

Batra et al (2004) accounted that functional voice disorders are caused by insufficient or improper use of vocal mechanism without any pathological and neurological disorders and it includes vocal fatigue, muscle tension, dysphonia, aphonia, phonotrauma and falsetto.10

Hoarseness is most frequently noticed in patient with different psychological disorders. The voice can be described as an emotional part of each person. Sundberg (1987) described that articulatory and laryngeal structures, and respiratory muscle activity patterns change during stress, anger and bipolar disorder.

In patient with hoarseness of voice and history of tobacco use may have laryngeal malignancy and alcohol use increases the risk of malignancy in smokers.

The incidence of hoarseness was 0.73% among total OPD and. M:F ratio was 1.87:1 with male predominance. Hoarseness of voice is just a symptom with a very diverse etiological factor. The etiological data varies in different geographical location, so every case should be carefully and thoroughly evaluated and examined to know the early diagnosis of underlying pathology for prevention and accurate management of patient.

Middle aged and elderly patients presenting with hoarseness of voice of more than six months duration along with habits of smoking and chewing tobacco preparations must be thoroughly examined and malignancy condition should be excluded out. The voice can be restored to near normal with appropriate treatment, follow-up at fixed interval must be done in most of the benign and malignancy conditions.