Introduction: Metastasis of head neck squamous cell carcinoma to regional deep cervical nodes is a common and usually are bony hard, solid. But sometimes they may present as a cystic mass which makes it a diagnostic challenge, in absence of evident primary, for the treating doctor. Previously they have been labeled as cancers of branchial cleft cysts which have undergone malignant degeneration. With the advancement in understanding of tumor pathophysiology most researchers now have concluded that these are tumors from tissue of waldeyer’s ring which have the potential of producing cystic cervical metastasis.

Case Report: A 57-year-old male presented to our department with a right side slow growing neck swelling for 2 years. The rest of ear, nose, throat examination was normal. The fine needle aspiration cytology revealed clear fluid. The diagnosis of branchial cleft cyst was made and patient counselled for surgery for benign lesion. After a period of one month the patient presented with change in voice, difficulty in swallowing and another swelling on left side of the neck. FNAC from the left side swelling revealed metastatic squamous cell carcinoma and PET-CT revealed a tongue base growth. Patient underwent an excision of growth from tongue base and neck dissection on both sides.

Conclusion: Even for cystic neck swelling in an adult over 40 years of age, the possibility of malignancy should be kept, until proven otherwise.

Up to the first half of 20th century all cystic cervical metastasis of squamous cell carcinoma were thought to be of branchiogenic origin. They were labeled as cancers of branchial cleft cysts, which have undergone malignant degeneration. Now it is known, that certain squamous cell carcinoma of waldeyer’s ring is capable of producing a cystic cervical metastasis. The aim of this case report is to highlight such phenomenon which aids doctors in such diagnostic dilemmas.1, 2, 3 The majority of cystic secondaries arise from oropharyngeal tumors.4

Clinical preoperative picture showing the extent and surface of the right-side swelling. 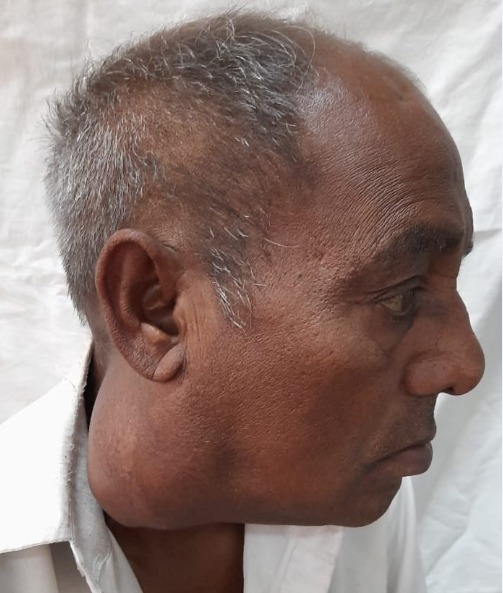 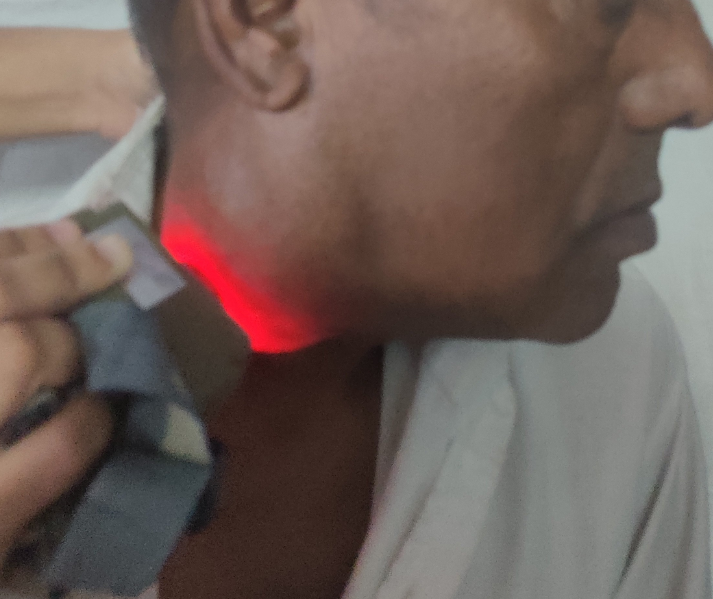 Axialcut section of contrast enhanced computed tomogram showing a hypodense lesionon the right of neck extending up to clavicle with no contrast uptake and withno significant central necrosis. 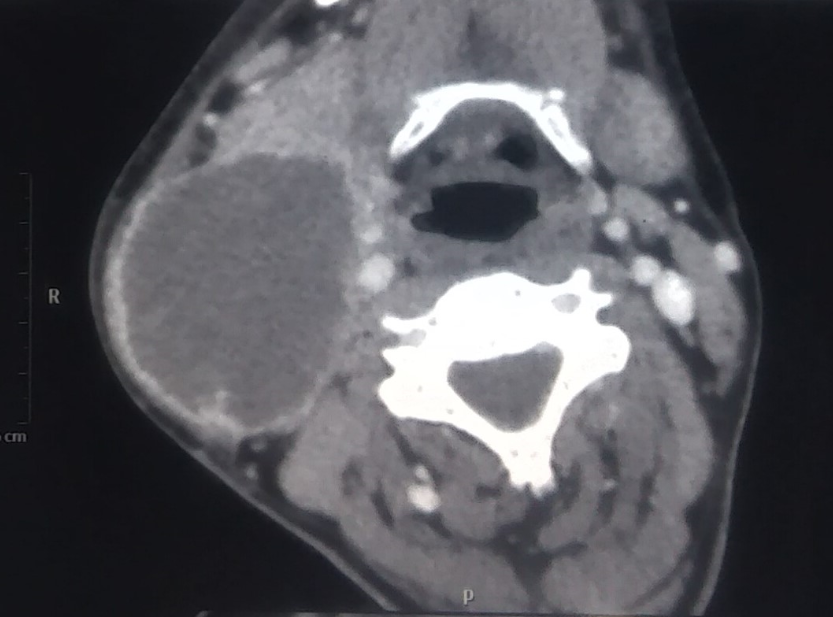 Clinical picture showing left side cervical swelling at the level II A, seen after a month of initial presentation. 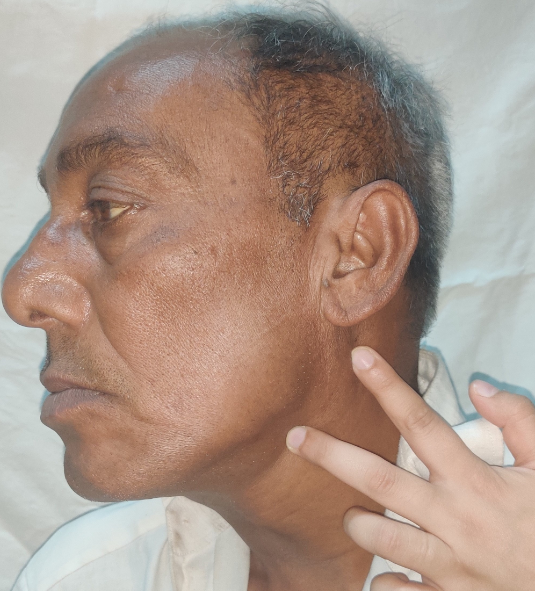 Axialsection of 18 FDG PET-CT showing hypodense lesion on right side neck with central necrosis and enhanced uptake at periphery and left side base of tongue. 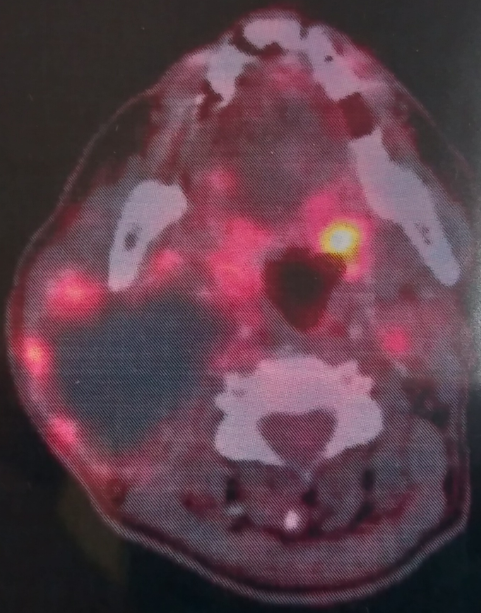 A 57-year-old male presented to our department with a right side slow growing neck swelling for 2 years. The swelling was about 9cmX7 cm in dimension and it extended from below the ear lobule on the right side to two fingers above the clavicle in vertical dimension and horizontally from anterior border of sternocleidomastoid to anterior border of trapezius. On clinical examination it was a solitary swelling with diffuse margins, uniform with non-bosselated surface, skin over the swelling appeared normal [Figure 1]. On palpation the swelling was having normal temperature, non-tender, cystic, fluctuant, but fixed to underlying structures, compressible but not reducible. Skin was pinchable over the swelling. There was no bruit on auscultation and swelling was trans-illuminant [Figure 2]. There was history of smoking and alcohol consumption. There was no history of weight loss or night sweats. No history of hemoptysis and hematemesis.

Rest of ear, nose and throat examination was normal. Ultrasonography revealed a heterogenous, hyperechoic cystic lesion on the right side. FNAC from the right side swelling aspirated 10 ml of straw-colored fluid which neither revealed any malignant cell nor cholesterol crystals. CECT neck revealed a large hypodense lesion on the right side with no contrast uptake [Figure 3]. Since a malignant lesion couldn’t be identified a diagnosis of branchial cleft cyst was made and surgery advised, which the patient refused.

The patient presented after a month with voice change, difficulty in swallowing and another swelling on left side of the neck. The second swelling was about 3cmX2 cm behind the angle of mandible [Figure 4]. It was hard in consistency and fixed. Direct endoscopy revealed right vocal cord paralysis. Rest of the cranial nerve examination were normal. FNAC from the left neck swelling revealed metastatic squamous cell carcinoma. Patient was advised for PET-CT to pick up unknown primary, which revealed a left tongue base lesion [Figure 5 ]. Patient underwent excision biopsy from tongue base and extended radical neck dissection on right side (internal jugular vein thrombosed, sternocleidomastoid, platysma, vagus and hypoglossal nerve involved) and modified radical neck dissection type III on left side.

Cystic cervical swelling often presents a diagnostic challenge for an otorhinolaryngologist because these lesions can be either benign or malignant. According to literature, any cervical swelling in an adult above 40 years of age should be considered malignant till proven otherwise 5. Previously, patients with cystic cervical metastasis were considered to be having branchiogenic carcinoma, which occurs due to malignant transformation in vestigial remnants of the branchial pouches.1, 2, 3

The recent literature, lays suggests that a solitary cystic cervical secondary may be associated with an occult or unknown primary in the tonsils, base of tongue or nasopharynx.6 The cystic secondary has a better prognosis, in comparison to solid neck secondaries of squamous cell carcinomas of the head and neck. It carries, 5-year survival rate of 77% and a 10-year survival rate of 50% (4).

The cystic metastatic lymph node has the major volume of liquid center with peripheral solid rim of lymphatic tissue. This occurs due to pseudocystic changes resulting from spontaneous breakdown of keratin and necrotic degradation of carcinomatous deposit.7 It also, may occur due to blockage of lymphatic flow in a metastatic node and collection of lymph.8 The nodal metastases in human papilloma virus associated squamous cell carcinoma of oropharynx, have been found to be prone for cystic degeneration.9 Also, the malignant cells have a slower growth rate in cystic metastasis10, that explains our patient long history of 2 years before presentation.

In an adult patient with cystic cervical mass, there is a possibility of malignancy and the clinical and radiological assessment should include whole head and neck area, in particular tonsils, base of tongue and nasopharynx. Any suspicious looking lesion should be biopsied and submitted for histopathology examination.

FNAC is a routine, simple investigation helpful in solid cervical lesions, but the sensitivity to reach a true diagnosis is low in malignant cystic metastases and branchial cysts (73% and 60% respectively).6 The false negative report in cystic secondary patient, may lead to false security, resulting in delay in search for primary and initiation of appropriate oncologic treatment. The FNAC should be repeated under ultrasound guidance from solid parts in the cyst, when in doubt.

The ultrasonography and Computed Tomography aids in the diagnosis of a cervical cystic mass. The branchial cleft cyst is well circumscribed, oval-shaped, with a non-contrast enhanced thin wall, with a hypodense and homogeneous center and with no septations. While the nodal metastatic lesion will be irregular, with peripheral contrast enhancement, invasion of adjacent structures, internal vascularization, heterogeneous center and internal septations.4 PET- CT, as in our case is helpful to identify unknown primary and also rule out chest metastasis, in patients presenting with secondaries, but negative clinical and radiological work-up.11

Cystic cervical metastatic swelling is uncommon presentation as it mimics branchial cleft anomaly. In an adult over 40 years of age, thorough clinical, Histopathological and radiological examination of head and neck is necessary. As the treatment protocol for benign and malignant pathology is very different, delay in treatment may be life threatening for the patient with malignancy. This case report specifically highlights these points.

J Johansen S Buus A Loft S Keiding M Overgaard H S Hansen Prospective study of 18FDG-PET in the detection and management of patients with lymph node metastases to the neck from an unknown primary tumor. Results from the DAHANCA-13 studyHead Neck2008304471810.1002/hed.20734