Tubercular retropharyngeal abscess along with potts spine is very rare in children. As there is no specific sign and symptoms of tuberculosis are present and even if present can be masked by features of nretropharyngeal abscess these cases may have delay in diagnosis. Early diagnosis is important to start proper treatment and can prevent the disability and mortality. In this article we report a case where a child presented to our opd with complaint of right sided neck swelling, dysphagia and neck pain with restricted movement. Any symptoms or signs of tuberculosis were not present. Clinical examination and MRI of neck suggested this as a case of retropharyngeal abscess with cervical spine involvement. Intraoral surgical drainage of pus sent for CBNAAT examination and it revealed the diagnosis of tuberculosis. Antitubercular regimen was given for 12 months. During follow up his symptoms gradually improved and after 1 and 2 year follow up child was free from tuberculosis. So in conclusion we can say retropharyngeal abscess in child should be dealt promptly and in case of abcesses refractory to conventional medical treatment, high degree of suspicion of tuberculosis should have present especially in endemic countries in order to reduce morbidities and improve clinical outcome. Early diagnosis and treatment can improve the scenario significantly.

Tuberculosis is a common disease in developing countries and India is one major country among 14 countries that accounted for 63% of the estimated global number of incident TB cases in 2019.1 Though pulmonary tuberculosis is more common but there are various extra pulmonary forms of tuberculosis also present. Tuberculosis of the spine, or Pott' s disease is relatively rare, but it should be strongly suspected in a patient who presents with a destructive lesion of the vertebra and a retropharyngeal mass that extends across the midline. Early diagnosis is essential in order to avoid the onset or progression of the neurologic sequelae of Pott 's disease. In this clinical report we describe a case of cervical spine tuberculosis with retropharyngeal abscess in a child in whom early diagnosis and intervention prevented the serious complications associated with Pott 's disease.

An eight year old boy presented to the OPD of a tertiary care hospital with chief complaint of right sided neck swelling for last 3 months. He developed dysphagia and neck pain with restricted movement for last 20 days. He had no history of shortness of breath, chest pain, cough, change of voice. There was no impaction of foreign bodies, dental extraction, endoscopy or any invasive procedure. He had no other significant past history of any medical or surgical conditions. He had no history of tuberculosis in his family. Patient had history of multiple antibiotic treatments from local hospitals for this same problem before coming to our hospital. 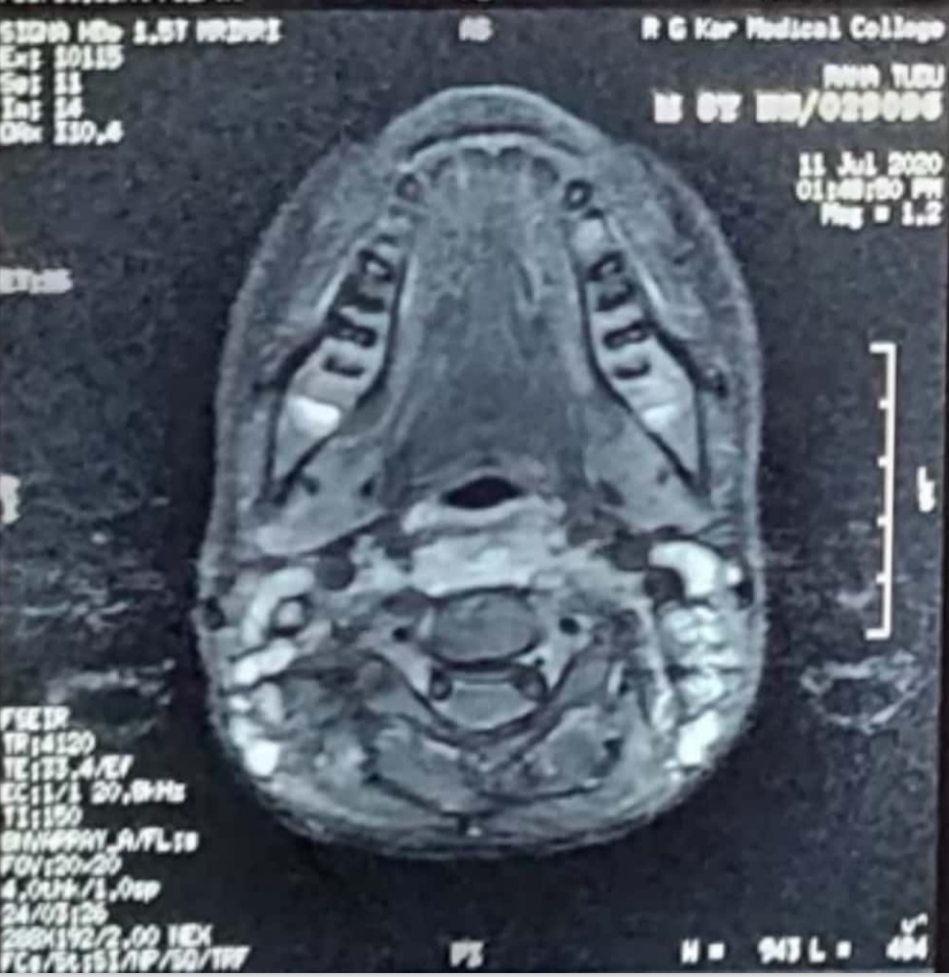 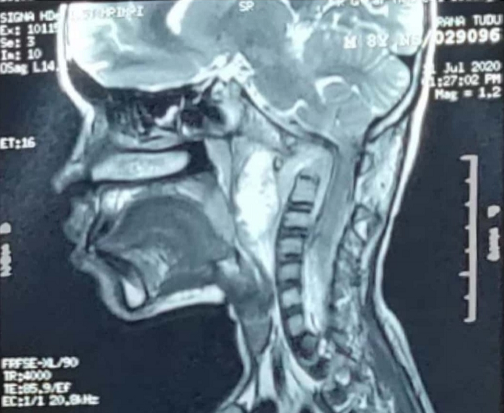 On examination child was alert, conscious and irritable. There was no pallor, icterus clubbing or cyanosis. Neck movement was restricted. In oral cavity examination, mouth opening was restricted. There was swelling at posterior pharyngeal wall. Definite fluctuations appreciated during digital examination. He had a swelling at right submandibular region which was 3× 3 sqcm in size, firm and tender; temperature over swelling was not raised. There was no cervical lymph node palpable. Cranial nerves examinations were within normal limits. Examination of respiratory, cardiovascular and GI system showed no abnormality.

On blood investigation he had hemoglobin of 10.2 gm/dl. Total leukocyte count was 8300/cmm and platelet count was 611000/cmm. Liver functions and renal functions were within normal limit. Multiplanar plain and contrast MRI of neck was done by T1, T2 and STIR sequences. A well-defined elongated, altered signal intensity collection was noted in the retropharyngeal region extending from the base of occipital bone superiorly up to the level of C5 vertebrae inferiorly. There was thick and saggy marginal contrast enhancement. At the level of C3/C4 vertebra it was seen to extend laterally between the sternocleidomastoid anteriorly and the longus capitis muscle posteriorly on both sides. Widening of retropharyngeal space was seen with flattening of the prevertebral muscles. Mild compression over the anterior air way spaces was seen specially at the level of oropharynx. Both carotid sheaths were seen to be displaced laterally. Parapharyngeal spaces are displaced anterolaterally on both sides.[Figure 1 and Figure 2] HRCT thorax was within normal limit. Incision and Drainage of abscess was done via transoral approach under general anesthesia. 20 ml pus was aspirated and sent for culture and sensitivity which was sterile. Cartridge- based nucleic acid amplification test (CBNAAT) demonstrated growth of Mycobacterium tuberculosis which was rifampicin sensitive. Patient was put on category-1 antitubercular therapy with Isoniazid, Rifampicin, Pyrazinamide and Ethambutol for 2 months and then Isoniazid and Rifampicin for the next 10 months. Patient was advised for Philadelphia collar to stabilize neck movements. During follow up at one and two years after diagnosis, child was found free of symptoms and investigations revealed no evidence of tuberculosis.

Retropharyngeal abscess is a rare presentation of tuberculosis, even in a patient with extensive pulmonary tuberculosis. It has been reported that 1% of all patients hospitalized with tuberculosis have skeletal tuberculosis, 1, 2 with only 7% of these having involvement of the cervical spine. 3 It is an important causative factor for chronic retropharyngeal abscess in adults. 4 In tuberculous infection of the cervical spine pus spreads directly through the anterior longitudinal ligament. Similar to the observations of Mathur N.N and Bais A.S, 5 Hsu and Leong 6 in their series, our case also had a large retropharyngeal abscess as a complication of cervical Pott's spine with minimal signs of cord compression. 7 The early stage symptoms of spinal tuberculosis like low grade fever, weight loss, malaise and night sweats are frequently absent in our case. Dysphagia, torticollis, painful neck movements and respiratory distress can occur in retropharyngeal abscess. 8 MRI spine (including non-contrast T1W, T2W, STIR; and gadolinium contrast enhanced T1W sequences) is the most important investigation for vertebral erosion and narrowing of intervertebral space. MRI can help to differentiate cold abscess from granulation tissue. Chest radiograph is helpful for complications like pleural effusion, mediastinitis and pneumonia. 9 In our case HRCT thorax excludes these complications.

Early diagnosis is key to proper and definite treatment. However, there is still lack of proper guidelines on the accurate treatment and management strategy for cervical spine tuberculosis and subsequent retropharyngeal abscess that makes the treatment more complex and challenging. 10 It is very difficult to suspect tuberculosis primarily, due to the similar and common symptoms of retropharyngeal abscess and common symptoms and signs of tuberculosis may be masked. In our patient, there were no classical symptoms of spinal tuberculosis in the beginning and thus the diagnosis was delayed. Although surgical drainage improves compressive symptoms, medical therapy remains the mainstay in the treatment of tuberculosis. Extrapulmonary tuberculosis including bone involvement, the recommended duration of anti-tuberculosis medication is 9-12 months. 11, 12 In the present case the duration of medical treatment was planned as 12 months and after follow up this treatment proved beneficial for the patient also.

This is a rare case of tuberculous retropharyngeal abscess with cervical spine involvement. It highlights the importance of suspicion of tuberculous infection as a possible cause, particularly in endemic countries. Diagnosis is difficult especially in chronic retropharyngeal cold abscesses, when the presenting symptoms may be gradual, non-specific or often misleading. Radiological investigations like CT or MRI should also be done to assist in the diagnosis and aspirate should be sent for CBNAAT for diagnosis of extrapulmonary tuberculosis when correctly managed, this disease process should have low morbidity and mortality in recent era.