Unusual presentation of lung carcinoma as nasal tip metastasis: A review of literature

Lung carcinoma is the most common type of carcinoma seen in males and 4th most common in females.1 Skin metastasis from lung carcinoma is frequent with an incidence of 1%-12%, with most common site being the anterior chest wall.2 Skin metastasis from lung carcinoma to the tip of nose is very rare with only 12 cases being reported in literature(Table 1). It can be confused with other benign and malignant conditions, such as infection, lymphoma, hemangioma, rhinophyma, sarcoidosis, tuberculosis and carcinomas, making its diagnosis difficult.3 Less than 20 cases of cutaneous nasal tip metastasis are reported in literature out of which 12 are from malignancies of lung. Sometimes it can appear earlier than the primary lesion and thus delays the diagnosis of primary lesion. =4 In this case report, we report a case of nasal tip cutaneous metastasis from squamous cell carcinoma of lung.

A 70-year-old male visited ENT opd with complaint of a lesion over nose since 3 months (Fig. 1), which was gradually progressive. Patient did not have any other symptom. It was about 5*5 cm in dimensions, ulcerated, erythematous and vascular on inspection. It was firm and tender on touch. No cervical lymph nodes were palpated. On magnetic resonance imaging of face, a well defined lobulated lesion of size about 3.7*2.5*3.6 cm was seen arising from the tip of nose with external surface bulge extending into the left nasal cavity(Fig. 2a, 2b). Punch biopsy was planned. All blood investigations were normal. Chest x-ray was done for pre anaesthetic check up and it showed homogenous opacity in the left upper lobe.(Fig.3) Punch biopsy was taken from nose which on histopathological examination showed squamous cell carcinoma. Contrast enhanced computed tomography of chest showed large soft tissue mass in left upper lobe, abutting chest wall and showing contrast enhancement with left sided pleural effusion(Fig.4a,4b). Ultrasound guided fine needle aspiration cytology of left lung mass was done which showed squamous cell carcinoma of lung with inflammatory changes. He was referred to radiotherapy department where he was given palliative chemoradiation. Patient died after 2 months of cutaneous diagnosis. 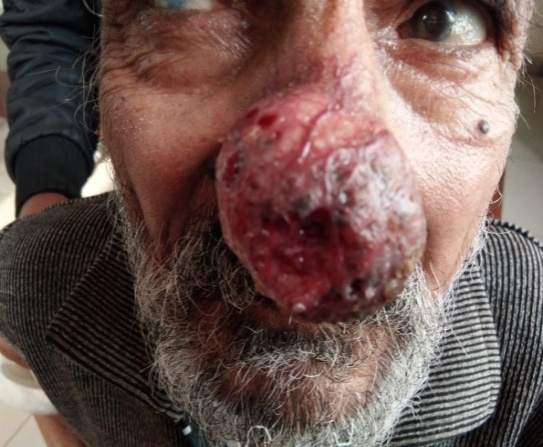 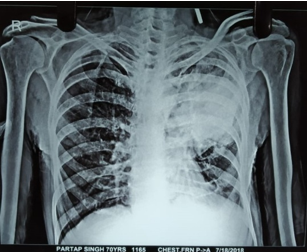 Skin metastasis are common in lung carcinoma with anterior chest wall being the most common site followed by the abdomen, extremities, neck, back and; head and neck. 5 Metastasis to the tip of nose is however a very rare condition with only about 24 cases reported in the literature till now including our case. Cutaneous metastasis from lung carcinoma may appear earlier than the diagnosis of primary malignancy. Renal cell carcinoma is considered the most common malignancy metastasizing to the nose and paranasal sinuses. However on reviewing literature, lung carcinoma was seen to be the most common malignancy metastasizing to the nose tip. 6 Among lung carcinomas, adenocarcinoma of lung is the most common type metastasizing to skin, followed by squamous cell carcinoma. 7 The upper lobe tumours have more tendency of metastasizing to the skin. 8 Squamous cell carcinoma was the most common malignancy of lung metastasizing to the tip of nose. 9 It may appear as firm to rubbery with or without ulceration, blue to reddish in colour and may be single or multiple. 10, 11 Different theories are explained for its pathogenesis. Its spread may occur via the pulmonary vascular and lymphatic routes, the vertebral plexus, the arterial embolus and the venous sinuses of the skull which on communication with the vertebral system metastasize the tumour cells to the nose. 12, 13 Patient of internal malignancies presenting with cutaneous metastasis have poor prognosis with life expectancy of about 3-5 months.[14-16]14, 15 Nasal tip skin metastasis are also reported in literature from malignancies of thyroid, hypopharynx, esophagus, chordoma and leukemia. 12 There are different opinions regarding its management, ranging from wide surgical excision with reconstruction to chemoradiation. Due to very short life span of these patients, wide surgical excision with reconstruction doesn’t seem to be feasible. The tumour mass can be excised and raw area can be left for healing by secondary intention or patient can be given chemoradiation for it. On reviewing literature for nasal tip metastasis, we found that the age of cutaneous nasal metastasis varied from 40 years with chordoma to 86 years with renal cell carcinoma with a mean age of 63.45 ± 10.8 years. Out of 24 cases, only 6 were females(25%) and 18 were males(75%). Female dominance was seen in extrapulmonary primaries(45%) than pulmonary primaries(9%). Tip of nose was the most common site of meatastasis in both pulmonary and extrapulmonary primaries. Histologically squamous cell carcinoma was the most common primary that metastasized to nasal tip. Survival time ranged fromless than a week to 18 months with a mean life of 4.57 ± 5.45 months with mean survival life of metastasis from pulmonary primaries less than that of extrapulmonary.

Nose is a part of facial skeleton and due to its asthetic value patients usually presents with lesions of nose while neglecting symptoms of internal malignancies. This usually delays the diagnosis and also lead to misdiagnosis in some cases. So it is the part of clinicians to examine internal systems in patients presenting with isolated malignancy of nose. Considering the low life expectancy of these patients, conservative approach should be taken for its management.