Conclusion: We present this rare case to highlight the use of diagnostic nasal endoscopy and Computed Tomography in the diagnosis and treatment of Sphenochoanal polyps

Choanal polyp are solitary, benign tumors arising from inflamed, edematous mucosa of the paranasal sinuses and extending over the draining ostium of the respective sinus reaching upto choana and obstructing nasopharynx. The polyp has three parts an intrasinusal ,ostial and extrasinusal.1 Any patient presenting as unilateral nasal obstruction with polyp extending upto level of choana to be arising from maxillary ,ethmoid , sphenoid or frontal sinuses. According to Dabas, 4 to 6% of all nasal polyp mjority are antrochoanal polyp2 sphenochoanal and ethmoidochoanal are rare entities.3In today’s era of endoscopes more and more newer diagnosis are coming up as a rare presentation such as sphenochoanal polyp. Correct diagnosis of these kind of polyps is difficult due to its non-specific clinical presentation. Almost 50% of sphenochoanal polyp are seen in children.4, 5, 6 We report a case of sphenochoanal polyp in 33 years old female which was successfully excised through endoscopic approach.

A 33 years old female came presented to our out patient department with complaints of right sided nasal obstruction. The patient was asymptomatic since 2 years when she developed right sided nasal obstruction which was insidious in onset gradually progressive in nature associated with mouth breathing , snoring ,headache and voice change. Patient was not relieved by medications. There was no history of nasal discharge , nasal bleed , loss of smell , post nasal drip and visual changes .On examination external nose appeared normal. On Anterior rhinoscopy, a single fleshy pale polyp was seen in right nasal cavity covered with mucopurulent discharge, insensitive to touch and did not bleed on touch. Posterior rhinoscopy showed a polypoidal mass occupying the nasopharynx. A polyp was seen to be arising medial to middle turbinate from the sphenoid ostium.

Patient underwent functional endoscopic sinus surgery under general anaesthesia. The polyp measuring 6*3*2 cm with the stalk of polyp arising from sphenoid sinus was excised en bloc and was delivered through the oral cavity (Figure 2). 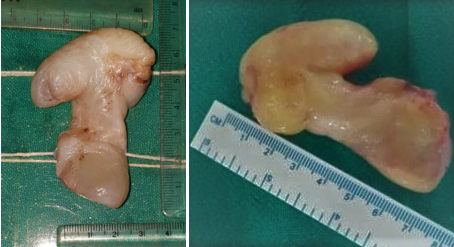 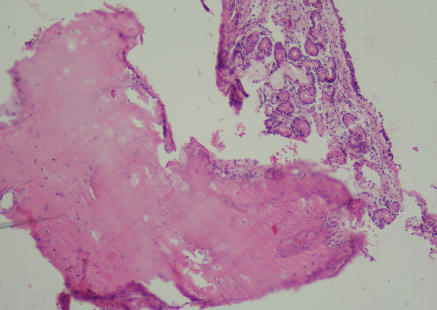 The sphenoid ostium was naturally widened (Figure 3) and the sphenoid cavity was cleared of the secretions with no signs of bony destruction. Bilateral anterior nasal packing was done with merocele. Pack removal was done after 48hours. The histopathological examination of the polyp showed an inflammatory polyp with no signs of malignancy (Figure 4). On regular follow up patient had no complaints or any sign of recurrence.

There is an association between choanal polyp and allergic diseases is seen among many studies but still the aetiology of the choanal polyp remain uncertain. 9 The choanal polyp are believed to arise from intramural cysts in the antrum or the sphenoid sinus supported by Berg’s study. 10

The most important differential diagnosis for sphenochoanal polyp is antrochoanal polyp as both are clinically and histopathologically indistinct.11 Their usual clinical presentation is unilateral nasal obstruction, rhinorrhoea, snoring, oropharyngeal mass and eustachian tube defect. 10 Histologically they are cystic centre surrounded by oedema with inflammatory cells, surface is covered by respiratory epithelium. Radiological investigation such as computer tomography or Magnetic resonance of paranasal sinuses play a key role in distinguishing between the two. 12 Whereas other possible diagnosis include meningoencephalocele, nasopharyngeal angiofibroma, inverted papilloma can be differentiated on histopathology. 8

Computer tomography of paranasal sinuses helps in localizing the sinus of origin, assessing the extent of the disease and planning the surgery. As in our case homogenous mass arising from sphenoid sinus and extending upto the choana and nasopharynx with proper aeration of other sinuses. Natural Ostium of Sphenoidal sinus was widened on CT Scan. 12 A large sphenochoanal polyp may obstruct the outflow of maxillary sinuses , both the sinuses may appear opaque on CT scan hence making it difficult to assess the site of origin. Diagnostic nasal endoscopy gives a valuable information as an adjuvant to CT scan in these patients. Sphenochoanal polyp being a rare presentation needs a proper and detailed investigation prior to surgery. Ophthalmological assessment is advisable to rule out any compression symptoms due to sphenoidal mass.

Functional endoscopic sinus surgery is the treatment of choice in Sphenochoanal polyp . Aim is to remove polyp en bloc with subsequent widening of sphenoid ostium along inferior and medial wall and clearing of sinuses . Endoscopic procedure is preferred over simple polypectomy as sphenoid sinus is closely related to important anatomical structure better visualisation and less aggressive procedure with lesser chances of reoccurrence. 13

Sphenochoanal polyp is a rare presentation , its mimics clinically and histologically to other sinonasal polyposis. An integrated approach with CT- scan of paranasal sinuses along with diagnostic endoscopy to confirm the diagnosis is required. As it is misleading disease wrongly diagnosed that can lead to unnecessary complication and recurrence of the disease.